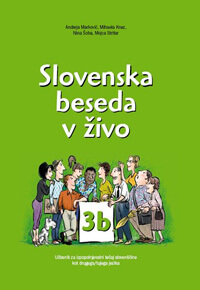 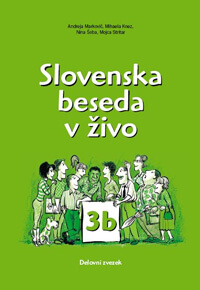 The intermediate level course for Slovene as a second and foreign language Slovenska beseda v živo 3 is aimed at adult learners and students of Slovene who wish to increase their knowledge to the C1 proficiency level or even higher. It is divided into two parts (3a and 3b), each of which is made up of a course book, a workbook and two DVDs with audio and video.

The material comprises 10 units that are coordinated with the programme Slovenščina za tujce and the guidelines specified for this level by the Common European Framework of Reference. Thus in part a, the first two units deal with everyday communication situations, while the following three units offer information about Slovene culture and history, as well as socio-political life in Slovenia and outside it. The units in part b deal with social issues, the media, topical themes in science and the language used in business texts. The final, tenth unit, is aimed at repetition and summarises the themes that have been dealt with. It encourages students to reflect on their language abilities and then presents a series of activities with which they can check how much they have learnt. At the end of both partsthere is also a short orthography. Both course books are further supplemented by a workbook, which contains exercises for reinforcement of the vocabulary, and grammatical and communicational patterns.